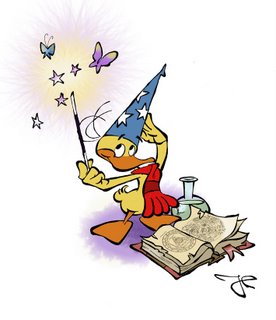 I'm receiving many emails , asking about the release of the first Kwak DVDs that was originally announced for Easter.
Disky, the publisher, decided to release them in the second half of the year, because they are planningf a bigger advertising campaign accompaning the release and there will be lots of other Kwak-related stuff,as well ( boardgames, etc) which I will tell you about, when the time has come.

Meanwhile and if you're living in Holland, you can watch Kwak on pay-TV for 0,99 € per episode on Tele2. I'm not exactly sure about how this works, but I'm sure you'll find out and tell me .
H.

My cat thinks she is a comedian. Anywayz very interesting concept. I would like to learn more about your funni little duck, especially the DVD.

I will wait for the DVD, :)
Do you know if the dvd will contain bonus materials like Storyboards or visual development artwork?

There will be a special DVD to conclude the collection, which will contain some documentaries, but they haven't been shot yet. And we haven't talked about the content so far.
Hi Manu, how are you, how's Dodo comin ?

Hey,
I bought a year of two ago a Alfred dvd in 'Bart Smit' in Belgium, I think for 5-6 euro. It contains the first 3 episodes. Its a really ugly lay-out (Alfred on his birtday, but its like its drawned with a Bic by a monkey who's missing feeling for composition).
I'm verry happy that there wil be finaly a dvd-set, and when I see te sketches, mooi mooi!
I hope it wil contain a verry big lot of extra's!

Dodo goes very, very slow... the workbook team is tired to drawn the millions of leaves therefor the team start to hate me:) I'm already working on a other feature anyway, full 3D.
and you?
^_^

I just finished some PreVis on "Enchanted" earlier this year and now I'm n another Disney-project.Lets go for a coffee one of these days, H

Being reminded I had to download episodes of this series through an illegitimate venue (and in German I believe), just so I could see what it was, I still haven't watched through an episode, but I've enjoyed your involvement on it. Just not a cartoon that may never come to the states at all!