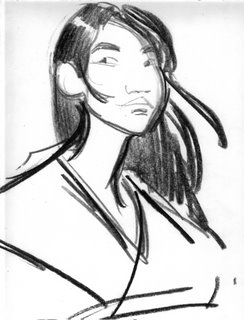 Here are some early sketches for Kenai's face. I wanted to come up with something different from Pocahontas and stay away from Mulan as well, so I was looking at a lot of faces from the South-Sea for reference , even Korea and the Phillipines, Eskimo as well.
I wanted Kenai to be in the middle of his puberty , so I tried to give him a girlish attitude as well, long thin limps for example a alltogether puppyish feel. 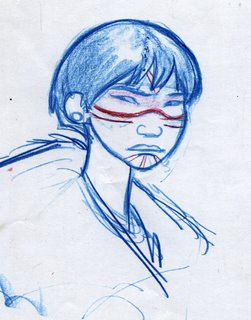 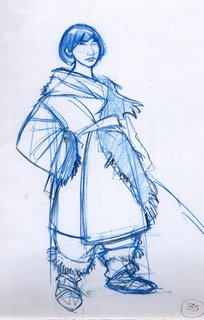 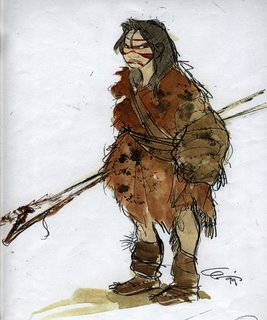 This is one of many costumestudies. I was looking for a way to anticipate the transformation into a bear in his costume, so I was going for a way of dressing, where he would just throw over some furs in the morning, that would also correspond with his impatient and impulsive character. I also liked the warpaint in this particular sketch. This sheet got into ther internet somehow and the buzz was, that Kenai was going to look a lot like Mowgli, but actually this was just one drawing of maybe a hundred. 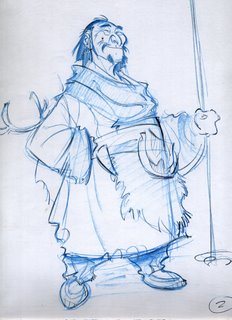 In the early version of the skript , Kenais father, Chilkoot, would be the one who got killed instead of his brother,by Kenais fault of course, butthey finally realised that that was too close to Lionking , so eventually Chilkoot had to go and was replaced by Denaii.
Gepostet von HaraldSiepermann unter 5:37 PM

The world is small after all! was just looking through your portfolio and noticed you teach at the animation school I graduated from back in 2000. TAW in Viborg that is.

Really like the loose/lively quality in these sketches as well as all the insights in the development of these characters. Outstanding.

Mr, Siepermann, these are cool. Very cool indeed. Thanks for posting them.

Hi Harald,
these drawings are wonderful, so much character inside! The making of book is awesome, got them all. But there is one little thing, they aren't able to spell your right name! I don't know why they have trouble with it, it's easy. Thank you so much for teaching us at the Animation School Hamburg!
I had a great time!!!

They never get my name right, because I'm never there to proofread it. All they know is, its kind of european, meanwhile there are many versions of my name around, ,,,and I got used to it.

Hi Uli, I was indeed islandhopping through the caribbean once, and I was Superman in one airport and Spiderman at the next. ...and I grew up kindof thinking that Superman was a distant relative of mine , ....great to see you back from your holidays, Uli.

You always have such wonderful jems in your pouch. You are a wonderful designer and your characters are so full of life. You are quite the talented artist that has choosen a life of the character creator.

These are wonderful; thank you so much for sharing these!!

Man! We're so lucky. I just saw one of yours on the BB DVD recently. Love your work. Thanks for sharing as always !