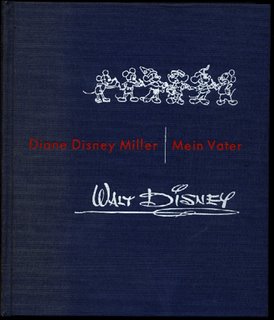 I just got this from an online antiquariat. Believe it or not, this was the one and only book on Disney and animation that I could get in Hattingen's public library . I rented it several times. There was nothing else to read (on animation) until I bought that Christopher Finch book from my first self-earned money (in Bert Sälzer's local adverticing agency), when I was like 17/18. A year or two later "The Illusion Of Life" came out...it's funny to look at it again after so many years.
Gepostet von HaraldSiepermann unter 1:54 PM

My first animation book was "Animation: from Script to Screen" Shamus Culhane.

I was 9 years old. Didn't understand everything but I respected him. My stepfather found a copy of it in a Boston library, and then looked around for a copy so I could read it. I love my parents.

Did you tell me about cells and cels ?

yes that was me! lol Like I said I was a little confused when I was little! lol. Either that or more interested in coming up with my own explanations of things.

hi! thanks ! your blog is very interesting too!, do u like films??