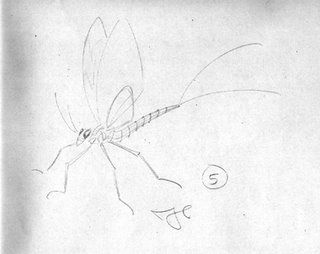 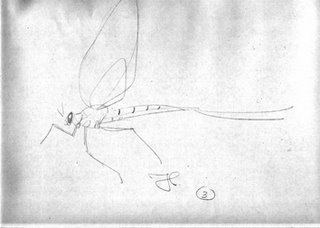 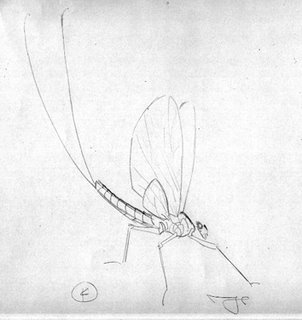 Last year in june I rented a car and drove 5 hours straight to Holland to Herman van Veen's house, had a meeting and drove 5 hours back, it was ridiculously hot outside and the aircondition was working at it's limit all the time. All this resultet in an enormous lumbago, which sent me straight to bed for a couple of weeks.
When the pain was worst, Passion Pictures called, asking me to design a realistic mayfly, which was supposed to have "character" nontheless. You don't say "no" to Passion, do you?
I managed to sit in my chair for half an hour a day and came up with just a bunch of sketches,. I felt depressed and angry, I wasn't happy with what I had done, not at all, so I didn't even charge Passion for the sketches.
In the meantime its all forgotten, both- the lumbago and the mayfly, till I saw this commercial the other day. I don't know who eventually did it, but he /she did a good job, don't you think ?

Hey Harald, Neil Ross did some design work for this too. It's in the November archive of his limbolo.blogspot.com

He says Aardman made it in the end.

Didn't know that, as I said, I was pretty sick at that time and didn't work on it more than a day an had forgotten all about it, until I saw the spot, say hello to Neill....H

hi harald-nope-tim watts animated on it at passion-i think it has won an award or two..too
great blog harald..thanks for the inspiration